Angela-Places Where I Have Lived

Places Where I Have Lived

I live in Stony Stratford.  I moved into the area in 1998 initially. 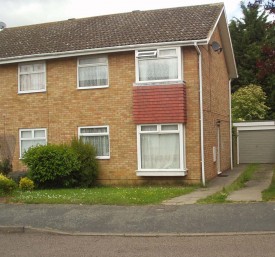 My first home was in Hilltops in Fullers Slade  which, although not actually in the village of Stony Stratford, is within the post code area.

I moved into  Malvern Drive – a small two bed roomed semidetached house, built in the 1970’s.

The origins of the name Malvern Drive was named after the Malvern Hills in west Central England. They are in Worcestershire and are gentle Hills of pastureland where sheep and cattle graze. Fullers Slade is composed of many Council Owned properties, and has been designed to house families, single people and has different sized homes. A pleasant feature of the area is the wide open spaces between the houses where the children can play and the families meet to chat.

The name Fullers Slade was taken from an existing field name Fullers or Fulwell Slade, shown on a map of Wolverton of 1742. Sheep farming was in progress and Fullers would have fulled the woollen cloth, which meant scouring and beating it to clean and finish it before spinning and weaving took place.

One of the main features of the house was the garden. Although small, it was compact and had a beautiful wisteria that grew up the garage. Purple flowers adorned the branches, together with pale, delicate, small green leaves which come out fully when the blossom has fallen off. Penstamon adorned the rest of the garden, and lasted throughout most of the summer.

There was a shop and a post office within a complex which housed a Meeting Hall on the floor above and access was by a tunnel, via the footpath to this area , called Galley Hill, the name being associated with the Gallows in Association with Little Brickhill Assizes 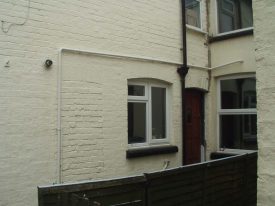 At the end of that year I moved into Jubilee Terrace.  Stony Stratford

This was a row of Victorian houses which were approached by the back door entrances via a paved path., through the ‘back yard’. The ‘Front Door’ was set at the back of the houses with accompanying ‘front’ garden. At the end of the garden was an earth track which originally would have been the main entrance, through the front garden and door.

As I understand it these cottages were probably built in Queen Victoria’s Golden Jubilee in about 1863   There were some small cottages which had already been built earlier, and then the rest of the terrace was built as a row of Victorian cottages like my house. 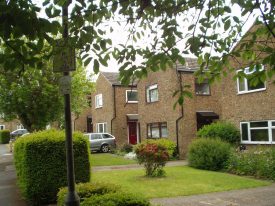 Just under a year later I had an opportunity to move to a more modern house in  Ryeland, Stony Stratford.  This estate had been built in1974 and was one of the earlier modern Milton Keynes estates to be built on the former Fairfield Estate.These houses were built to the Parker Morris designs, which meant that there was a decent square footage and facilities for so many allocated people per house. The houses had the same square ground footage but all different layouts and designs, and some were taller with more rooms built upwards.

The name Ryeland was originally part of the three memorial cultivated fields on the western side towards Wolverton, before the general closure of 1654. It was probably used for growing rye. 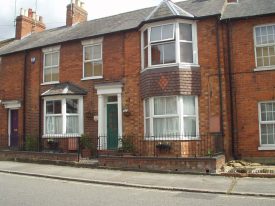 Finally in 2012 I moved into the Old Butchers Shop

This is a double fronted house, but began as just one house- the left side facing the front was built in 1890. For unknown reasons another house was built on next to it in 1910.

The Wolverton Road is the road from Stony Stratford to Wolverton. Hence the name. Building started in the 1850’s along the road. A tram used to run between the two areas, to take the people to work, either in the Wolverton Rail Works or the Printing Works.

The outhouse at the back of my house was the meat storage area, which could be accessed by the back lane. As far as I am aware, the Butchers shop closed in the mid-nineties. Thereafter it became residential and had internal works done to improve it.

The town of Stony Stratford lies on the Old Watling Street (now the A4). It grew up in the Middle Ages and was settled by the Normans Originally and was the Stony Ford, where the road straddles the Great Ouse via a bridge. It became a market town, markets held in the Market Square, and Horsefair Green. It became a staging town for the route north and many Inns along –now- the High Street put people up and had yards at the back for the coaches.

There was a fire in 1742, which destroyed much of the town and so some of the buildings are more recent, dating from the 17th and 18th century.