Netherfield Residents Association has been going for over 35 years, we do Trips to the seaside, fun days, Parties and help the community get the best from our Estate, we have a history we want to share.

Netherfield was one of the earliest completed rental housing grid squares in MK.  It was built between 1972 – 1977, and is the second largest rental scheme in the city.
The first houses were available in 1974 and by 1981 2,650 people had moved in making Netherfield the 4th largest new housing community in MK.

Despite criticism, Artists have been drawn to Netherfield: Eugene Fisk, writing in 1981 described Netherfield in a bow-shaped curve of land in the south of the city… the top of the bow slopes down towards the canal, with views of Woughton and Walton beyond.  The long rows of houses are corrugated metal (Like Beanhill) but the height and change of colour bring us to a different place.  Three-storey lengths of silver-grey stretch across a marvellously planted site.  Each house in the terraces is separated from the next by a projecting fin……
And sculptors have created two special features which are still in the ABC park on Netherfield: The Owl & the Pussycat by Liz Leyh (1976) and the Totem Pole by Lesley Bonner (1979).

The meaning of Netherfield and it’s roads

The word Netherfield comes from an old field name recorded in 1781, and literally means “Land that is Low-Lying”, in the same way that Holland is known as the Netherlands, or Lowlands.
The street names came from the times of the “Lord of the Manor” in the Middle Ages (1200 – 1500A.D), using words connected with fields, ploughing and land measurements – as follows:

“Langland” – A long piece of land.

The amount of land which could be tilled with one plough in one year or was needed by one free family and its dependants.

“ Buckland”- Fields where deer can be found. 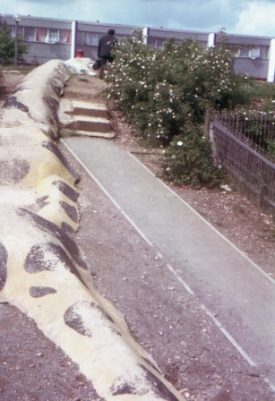