By Eileen
I was living in the Harlesden area of North London in a high rise block of flats with 4 young children aged 3, 5, 7 and 9 I was also in an abusive relationship and decided enough was enough.  I had friends in Milton Keynes so in February 1983 with just a few carrier bags we jumped on a train and never looked back

My home is in one of the crofts there are two sides to the croft with a car park and garages separating the two, although when I first moved in there was no garage’s it was a carport the garage’s came later.

One of the houses in Pinders Croft was used as a temporary health centre and a shop was set up in a ground floor flat by the time I moved in 1983 the health centre, shops and schools were already established we had a nice parade of shops and also the housing office was on the parade but now that’s no longer there and the shops have changed so much now. There was also a social club called Greenleys meeting place the play school was held here they had bingo and karate lessons there was also squash courts. This is now a community centre and also has lots of things going on they have a community café which is open on a Wednesday morning, there was a youth club a couple of evenings a week but I believe this has now stopped due to no one being able to run it. 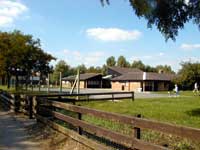 The names of the Crofts and Closes suggest that Greenleys was built on what would have been farm land e.g. Lamberts Croft = a Lambert was a lamb-herder or shepherd, Goddards Croft = a Goddard was a drover looking after animals, Harvester Close = the Harvester was a crop gatherer Akerman Close = an Akerman was a farmer Calvards Croft = a Calvard was a calf-herder and so on.

I have lived on Greenleys for 31 years in the same croft but not the same house I down sized and now live in a 2 bed roomed house my children have all left home and have families of their own and that is the same for most of my neighbours so it’s strange now watching all our grandchildren playing in the croft. 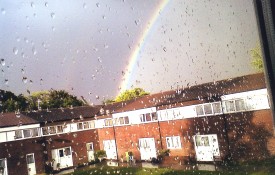 the croft on a rainy day 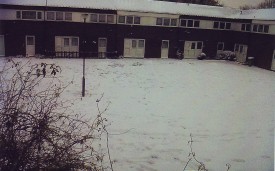 a snowy day in the croft