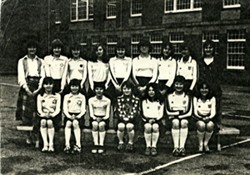 Photocopy of a black and white photograph of the Bushfield School netball team. The photograph is taken on the playground of the school with the building behind. The girls are arranged in two rows with the front row sitting on benches. The girls are all in netball kit. There is an adult at each end of the back row. The girl in the centre of the front row is holding a large shield.