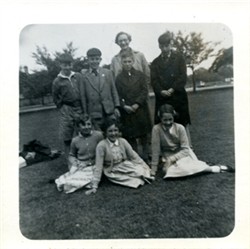 Black and white photograph showing a group of eight people. The photograph is taken outside in a park with trees behind the group. There are three girls sitting on the ground, with four boys standing behind them and a lady at the back of the group. They are named as L – R:- Roger Kilsby, Jeff Preston, Norman Clark, Keith Neal, Diane Turvey, Sheila Pell, Diane Randall and Mrs. Fleet.