The birth of the concrete cows 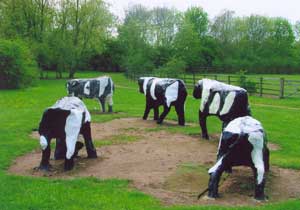 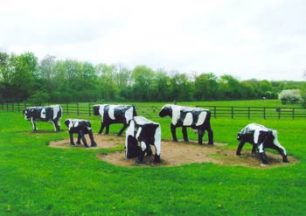 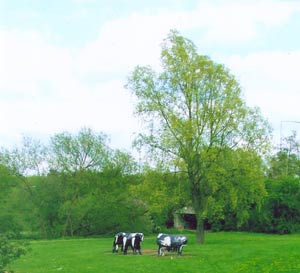 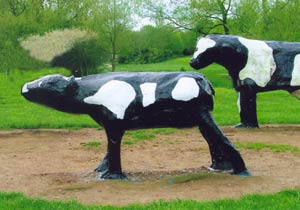 One day, many moons ago, I heard that the Development Corporation had appointed a new community arts worker. Coming from West coast , US of A, Liz Leyh came up with inspirational ideas to work with community groups and schools. As the green space of North Bucks was to have a whole new city built upon it, Liz wanted something to remind the inhabitants that farm animals had once grazed where concrete and bricks now stood. Eventually she hit upon the idea of building Concrete Cows.

She built the cows with the help of various Primary Schools. She let people know that she would appreciate some adult help when the children were painting the cows, so on a couple of days I went along – and helped to paint the cows in a field beside the railway bridge at Stacey Bushes.

In the weeks following the building of the cows, during visits to Stacey Bushes as part of a Young Arrivals Service, I heard people in the street talking about the Development Corporation. “See what they’re doing now! Spending a quarter of a million pounds on building concrete cows.” There was much criticism, as you would expect, of the plans of this unelected body and much rumour of their activities. My memory is that Liz spent about £35 on materials – scrounging a lot more – one of the essential skills of a Community Arts Worker. The Development Corporation at the time was spending a great deal of money on advertising the New City.

The Concrete Cows quickly became known all over the country and subsequently all over the world .Their publicity value was probably the £250,000 which street talk on Stacey Bushes considered the original cost. In the years that followed, many antics would be stimulated by the cows; cowpats made out of paper mache, milking parties etc. Sometimes the cows lost bits and much was replaced and many repairs occured. A new set were built in the National Hockey Stadium when the MK Dons took over as a football league team. The stadium stand took on the name of the Cowshed and this name has transferred to the south stand of the new Stadium:mk.