Bradville and beyond, late 1970s 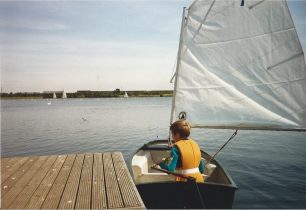 Children’s Day at The Bowl

In the Spring of 1978 my husband, Robin, myself and our young baby Mark, eagerly set off to explore the new Milton Keynes we had heard about. It looked the perfect place with its redways, beautiful parks and lakes along with a good transport system.  A great place to set up home. 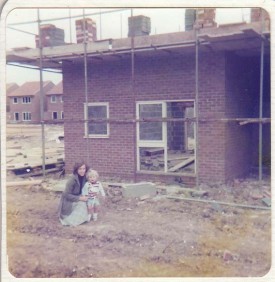 Withington in Bradville under construction in 1978

A redway ran all the way around, so that when learning to ride a bike Mark was very safe.  There was a children’s play park and plenty of green space behind the house.  The local Post Office was a short walk to Bradwell road, towards New Bradwell.  There was also a newsagent and a pub called The Jovial Priest

We didn’t have any central heating, just a gas fire in the lounge. It was freezing cold in the winter, so much so that the windows were frosted up such that it was not possible to see out of them at all! The garden was just a huge muddy bog!  One morning in 1981 I was woken by a knock at the door and as I stepped down the last few stairs my foot plunged into cold muddy water.  The whole street had been flooded by torrential rain.  Everyone was outside in the street as firemen came and pumped away the water

Eventually my husband dug channels into the boggy garden, into which he put gravel to help with drainage.  In the following Spring grass seeds were sewn, and Mark could play in the garden (although he spent most of the time peering over the wire fence at the neighbour’s garden – much more interesting)! Later Robin built a patio. We joined Mums and Toddlers and later, the playgroup in The Mathiesen centre

As I was expecting my second child, I went to Stantonbury Health Centre for ante-natal visits, along with monthly visits by train from Wolverton station to Northampton hospital.  Milton Keynes hospital had not yet been built.

Not having a telephone meant I was very worried about going into labour in the middle of the night as Mark, who was only two years old and my husband worked away.  However nearer the due date, my Mother-in-law came to stay, having taken time off her work as a GPO telephonist in Stevenage.  Here are photographs of us on the green in Bradwell just before Christian was born. 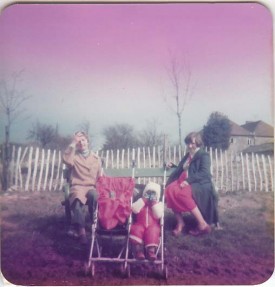 Our third son, Jamie was born in Northampton hospital in 1983.  I spend five days in hospital after the birth, which was usual at that time.  Some lovely friends, Shelley and Richard stayed with us just before and after the birth to look after the children

There was no shopping centre, so I usually took the bus into Bletchley for the shopping, or sometimes we would walk across the wooden bridge and over the fields (which are now Bancroft) to Wolverton. 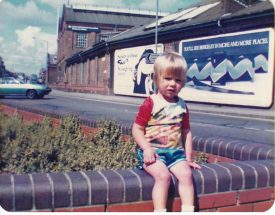 The above photograph, taken in Stratford road, Wolverton shows Christian sitting on the wall, with Wolverton Works in the background.  It’s seems strange to see the billboards advertising cigerettes which is illegal today, but was nothing out of the ordinary at the time.

To get to Wolverton we would walk through the fields and across a wooden bridge.  The area which has become Bancroft today 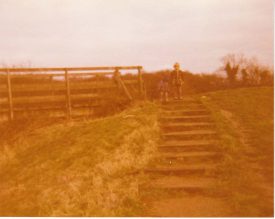 When central Milton Keynes shopping centre eventually opened we sometimes walked there or cycled, making good use of the redways.   Mark and I had our first ever McDonalds in the city centre when my school friend Krystina came to stay.  Soon after BHS  opened I got a Saturday job there, and after work in the summer we would meet as a family and get an ice cream 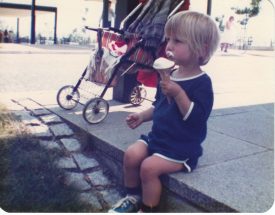 Stopping for an ice cream in The new City Centre

We saw the city growing, with the development of lots of new areas.  The following map was published in 1981 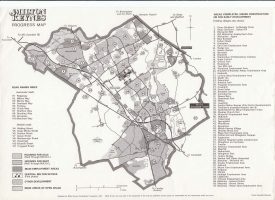 Here is a photo from our upstairs window, looking across the redway (where Robin can just be seen with Mark in a yellow pedal-cart).  Monks Way is obscured by the trees, but beyond it is Bradwell when the new houses were under construction 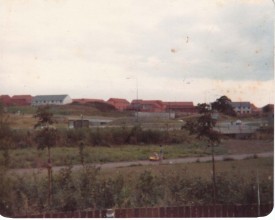 It was lovely to get out for a cycle as the children got older, and we could all make good use of the redways.  We bought our bikes from a lovely man we knew as Smithy.  Smithy had a work shop at the end of Bradwell road in New Bradwell where he was always working on bikes.  We took the bikes to him if we needed anything done – he knew everything about cycles.  He was great!  The children went to New Bradwell school, which was quite a long walk, but we used to go to the park for a picnic at lunchtimes when the weather was fine

We always found lots to do – we went on lots of walks, especially when family visited.  Cousins Wendy and Lindsay came to stay for several weeks in the holidays.  This photograph is taken at the end of Bradwell road, looking towards Bradwell 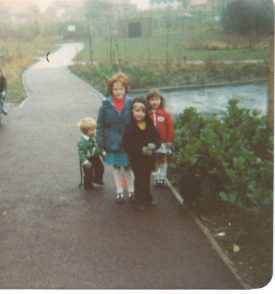 The redway towards Bradwell

We often walked to see the now famous concrete cows 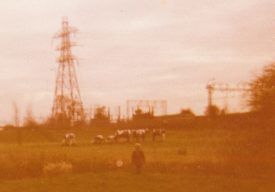 In the summer holidays we went swimming everyday at either Bletchley leisure centre, where we got the bus, or walked to Stantonbury Campus Leisure centre.  When the children got older we went to Willen Lake, and the children had a lovely time doing a week long sailing course 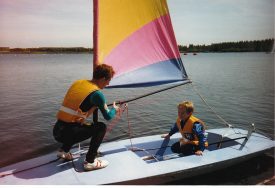 Taking part in organised activities such as Fun Runs and Childrens Day at The Bowl was always good fun, and the children loved it 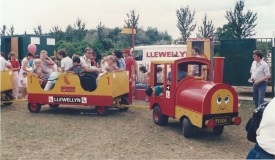 Children’s Day at The Bowl

When the Milton Keynes hospital opened in 1984 Christian had just started school and I went back towork as a nurse.  I used to cycle to and from work along the red ways

The hospital opened at last in 1984

Later I worked in the community, based in Bletchley, and I will always remember visiting a couple of very elderly spinsters who lived in The Old Bakehouse, Great Brickhill.

In 1985 we moved to a new house in Great Holm where our fourth son, Jonathan was born.   Once again, we set about transforming the mud into a garden