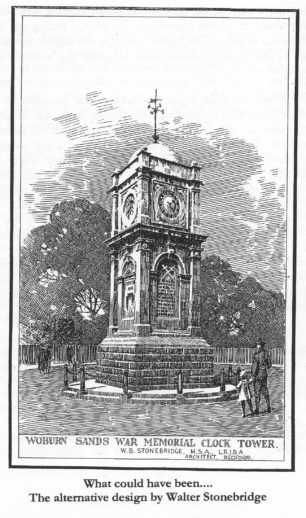 The day job was focused in north London at Colindale. I was living in Carshalton in north Surrey and the daily journey from home to office was of the order of 90 minutes in each direction.  Love and marriage arrived and our joint determination was to live in a 3 bed detached house, with central heating and a south facing back garden.  The search started with what might be nearest to the office.

Harrow was too expensive, Watford didn’t appeal, Garston seemed too posh whilst Hemel Hempstead didn’t quite fit. Luton’s urban sprawl of Wimpey houses really didn’t appeal so what was next?  An advert for Woburn Sands seemed to be worthy of further exploration – the map was consulted and the location found.  The journey up the M1 was going to finish at Junction 13 – the curious smell was much later discovered to be the Lidlington Brickworks of the London Brick Company.  Two miles to the West was Woburn Sands – a turn right by the Fir Tree pub/hotel and second right again found us in Vicarage Street.

It presented an almost welcoming appearance.  Late 19thC housing and down the end of the road, a small estate of some 20 plus houses, mostly in an advanced stage of construction..  What was to be ours turned out to be only built up to first floor level. Since we had some five months to go before a moving in date, this was not problem.  The advantage being that we could examine the plans, make fairly substantial amendments without having to find large sums of money to make them happen.

Our Solicitor, after carrying out the searches, advised that we had a soft water pipe running the full length of the plot from front to back – and under the yet to be built garage. Since this was to deal with water from an earlier ditch pattern in the former field, we decided it was not a problem.  His other advice was related to the possible future expansion of Milton Keynes.  Since the Act permitting the construction had only very recently been enacted in Parliament, the fact that there was a large ‘reserved for possible future expansion’ area ringing the 24, 500 acres of the new city, seemed so far away that we did not consider it a problem. Nearly half a century later, that view was one increasingly difficult to sustain.

The house made good progress and saw us returning to ‘do’ things that would make it more like the home we wanted.  The 7th October passed with big decisions made, in the midst of family and friends before departure the next day for our Clarkson honeymoon on the island of Elba.  In those days, from Gatwick – a flight to Florence, coach to Piombino, ferry to Elba’s Puerto Azzurio and then to the hotel.  And so it was that we finally made the journey up the M1 and became the latest incomers to Woburn Sands.

The following months were voyages – of discovery of the area into which we had moved; of the dubious delights of commuting up and down the M1 and the on-going delight having reduced the commute time per day to a near blissful one and a half hours.  Would it continue?  As time went on, it became increasingly obvious that the DoT had plans.  Sometime they were announced into the world via the media, and sometimes the signs just appeared.  Slowly, and how slowly the assorted widening programmes came to be improvements, actually – after they were completed, they really made a difference.

With both of us working in north London, the chance to ‘do’ things in the West End became a reality.  A love of opera and theatre were increasingly assuage.

This story was collected during one of our ‘My Memories’ IT Courses.