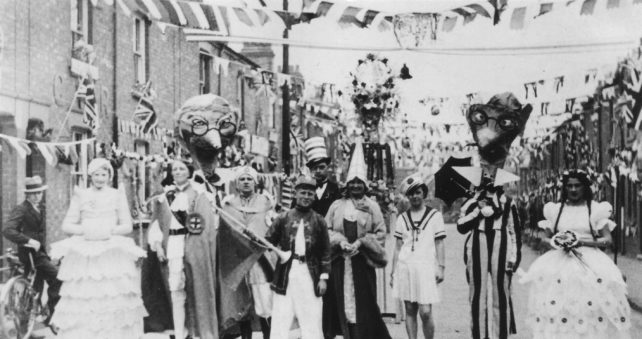 A large collection of photographs and documents relating to the New Bradwell and Old Bradwell areas of Milton Keynes during the whole of the 20th century, collected by Sylvia Mead (nee Hood).

Sylvia Mead was very interested in local history and wrote a number of books, using many of the photographs and documents in her collection as illustrations in the books:

New Bradwell – The Unique Community
Published April 1995
Chapters:
1. The Village of Stantonbury and St Peter’s Church
2. The Birth of New Bradwell
3. Places of Worship
4. Bradwell Station and ‘Nobby Newport’
5. Bradwell Mill
6. The Schools
7. Shops and other Businesses
8. The Pubs and Clubs
9. The Heart of the Community
10. Bradwell’s Wars
11. To Bring Us Up To Date

Marching Out
Published January 1996
The 95 Years of the Bradwell Silver Band
Chapters:
1. How it all began
2. Through the first decade
3. The War Years and the Roaring Twenties
4. War and Peace
5. Golden and Diamond Celebrations
6. The Seventies and Eighties
7. A Special Chapter
8. Marching Out to the Centenary Year

The Bradwells Old & New
Written April 1998
A look back at the people & their way of life in the two villages
Sections:
1. Some Memories Of The Two Villages
2. The Children Of The Villages
3. Sporting Activities And Pastimes
4. Carnivals and Concerts – Pantomimes and Parties
5. A Time of Change

A History of Wolverton, Buckingham
Published in 2004