You are here: Home>Archive>Taylor Brown Collection.>Wolverton Works and the Royal Train.>British Rail Engineering letter about redundancy. 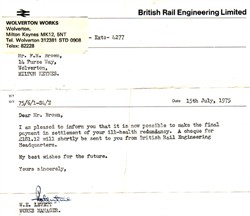 Letter to Mr. F. Brown from British Rail Engineering about his settlement for ill-health redundancy. The letter is dated 15th July 1975 and is signed by W.E Levitt, the Works Manager.