You are here: Home>Archive>Bigger Brighter Better>Oral history audio recordings with residents who moved into Bletchley as part of the London overspill scheme from the 1950s.>Interview with Daisy Doreen Brace (b.1921) about moving to Bletchley in the 1950s, housing, and domestic life.

Interview with Daisy Doreen Brace (b.1921) about moving to Bletchley in the 1950s, housing, and domestic life. 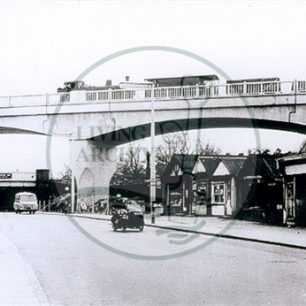 The railway flyover and the 'tin shops' at the end of Bletchley Road, 1962. Illustrative photograph supplied by kind permission of BCHI (Accession Ref: BLE/P/991). 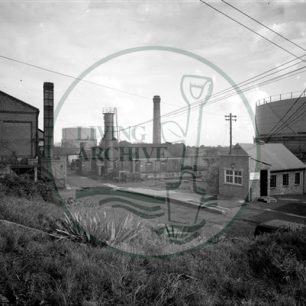 Daisy Doreen Brace moved to Bletchley in 1956 to the Rivers Estate, with two teenage sons and daughter. She talks of her parents and her childhood, then about her working life until her children were born, one with a hole in the heart. Her husband worked for the gas company; patrolling the gasometers at night to deal with incendiaries. He was moved to Bletchley and given a house.

She remembers her delight at the move: ‘when I walked through me own front door it was just like I’d been given a million pounds’. Her elder son got into grammar school; but social activities for children were limited – Scouts, Guides, Salvation Army band, football in the park, etc., but also lovely country walks. She loved Bletchley and enjoyed freedom away from her mother, who hated it and feared she might ‘lose’ her two grandsons. But she made regular train trips to London to see her mother and family.

She was very content with domestic life; occasionally she went to the Young Mothers Club. She remembers limited shopping, and a poor bus service, but mobile shops were very useful; she also used the local shops in Whaddon Way. She talks of the lack of a hospital. She remembers the Queens visit, her husband video’d part of it. She remembers the Carnival, and various events at Wilton Hall. She used Bletchley fruit and vegetable market, and attended St Mary’s Church.

She didn’t favour ‘Bigger Brighter Better’ Bletchley, she liked it as it was. Her children found difficulty in getting housing when they married, because they were competing with new London incomers who seemed to be given preference. She’s ‘amazed’ at the size of Milton Keynes but feels sad it has eaten up so many of the little villages. She comments on the attitudes of existing residents to Milton Keynes incomers. She recalls all the improvements to Bletchley since she moved there – shops, Post Office, supermarkets including Co-op. They moved back to London in 1973 with her foster children.