Woolstone and The Barge Inn 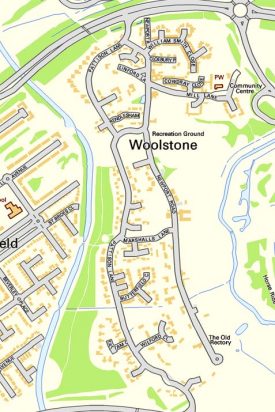 The two villages were originally surrounded by fields used for both arable and pasture and both had a pub: The Barge Inn in Little Woolstone and The Cross Keys at Great Woolstone. 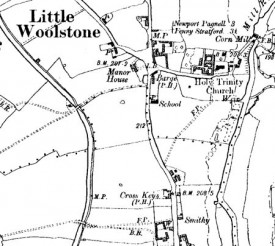 Map of Little Woolstone dating to 1900. The Barge Inn is located on the crossroads along Newport Road. (c) Crown Copyright and Landmark Information Group Limited (2016). All rights reserved. (1900). 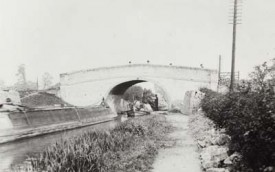 Photograph of narrowboats at bridge 84 at Woolstone on the Grand Junction Canal in 1910. The photograph shows the boat ‘Two Sisters’ and some people are standing on the bridge. From: Canals and River Trust, Waterways Archive BW192/3/2/2/12/1/256

Whilst the coming of the Grand Junction Canal brought limited change to the villages, the local pubs provided a welcome stopping point for those using the waterways. Bridge No. 83 led directly to The Barge Inn, which sits on the corner of the main crossroads of the village. 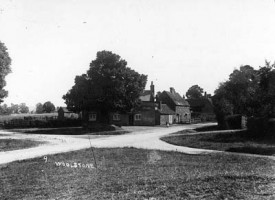 Certainly a number of barge workers frequented the Barge Inn although it is not certain if the pub was built specifically to cater for this ‘passing’ trade. However, architectural features such as the doorcase suggest it dates to some time after 1800 (Giggins n.d). 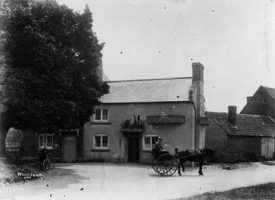 Living and working at The Barge Inn

The census records provided information on those that lived and worked at The Barge Inn. In 1871 Thomas Cox is listed as the Publican.

The 1871 census entry for The Barge Inn. From: Ancestry.co.uk

By 1881 Thomas Cox (now aged 63 years) was married to Susan Cox (aged 47 years). Thomas Cox is listed as a Licensed Victualler in the census.

The 1881 census entry for The Barge Inn. From: Ancestry.co.uk

Samuel Savage is listed as the Publican for The Barge Inn in 1911. The building was said to be haunted by Samuel Savage who died in 1933 (Giggins n.d).

The 1911 census entry for The Barge Inn. Samuel Savage is listed alongside his wife Annie. From: Ancestry.co.uk

It was in The Barge Inn that local villager, Alf West, regularly demonstrated his unusual talent – strong teeth! Just to the right of the entrance was the tap room which contained a hearth. This hearth was made from part of a train engine wheel. It is said that, “Alf would tie a rope around the wheel, clench the other end of the rope in his teeth and lift it off the ground” (Giggins n.d). Apparently he used this same act of strength to remove a body from the local mill pond (Giggins n.d). 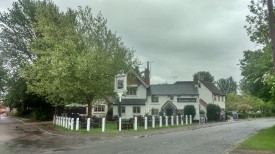 The Barge Inn today. The pub remains an important part of the Woolstone community.