You are here: Home>Open University>1981 Woman's Hour from Milton Keynes 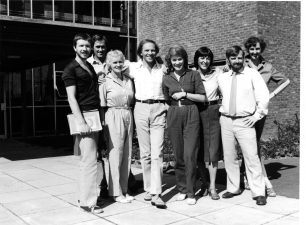 On August 26th 1981, I took part in the first programme to be made and transmitted from the BBC radio studio on the Open University campus at Walton Hall. This was a live production of ‘Woman’s Hour’ and involved a mix of recorded items on Milton Keynes and studio discussion. Woman’s Hour Chairwoman, Sue McGreggor, led the programme with live contributions from John Dankworth, MKDC Public Relations Officer David Crewe and OU researchers Nick Hall and myself. The photo shows us all with the BBC Woman’s Hour production team outside the studio.