A history of houses and places 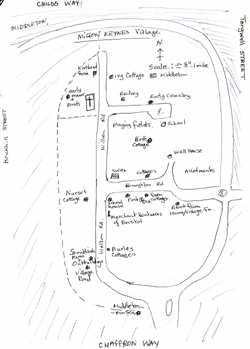 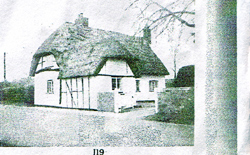 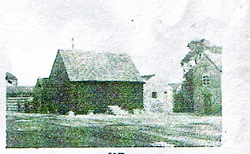 At the north end of the village, opposite the church, is a lane to a car park. When this was being developed in 1992 they disturbed older graves. This was the site of ‘Glebe Farm’, belonging to the Rectory. There is now a plaque beside the car park and the bones were re-interred in the present church graveyard under a brass plate near the gate. The bones were from AD 900 and were aligned East/West, probably Christian Saxon bones. This part of the village used to be the ‘Old Manor’ or ‘Rectory Farm’.

The church is old, with parts dating back to the 11th Century. The present building is 14th Century (1330) but the chancel and arch are earlier, about 1200. There was a school there and a plaque and a font mark earlier times.

Further north along Willen Road on the opposite side is ‘Ivy Cottage’, a beautiful timber and thatch cottage 17th Century. Later, on the left is ‘Northend Farm’. This was one of two main farms in the village and the farmhouse has now been divided between family members with a working art studio in the rear garden.

Beyond the farm, Willen Road comes to an end where the new development of Middleton has closed the old road.

Across a large green field is the school, built in 1850 and used until the 1970’s. It is now a community hall and a new school was built in Middleton nearby.

Around this part of the village are several homes and narrow pathways of the old village. One building here is ‘Bird’s Cottage’. It is a 13th Century cruck building with blackened timbers in the roof suggesting a hall style building. It is one of the oldest buildings in North Buckinghamshire, maybe an early manor, and was owned by a jobbing builder and local woodworker until the 1960’s. It fell into decay and was not until later that its age and worth were realised. It has been sympathetically restored since 1993 and an old sawpit and wells have been found in what is now a lovely garden.

A bus shelter with a chimney

Following through the pathways to Broughton Road, the bus shelter has a chimney on top. This is because it was originally a smithy. A travelling smith came regularly and was available to shoe horses or work on tools, gates fences and farming implements.

A row of cottages stands near here. They were built for farm workers. They were modernised in 1870 and have been modernised several times since.

Across the road is ‘Abbots Cottage’, so-called because the Abbot family lived there. It was built in about the 18th century and had a smallholding.

On the junction of Willen and Walton Road is ‘The Swan’ Public house. This is a Grade II listed timber, brick and thatch building, built in about 16th or 17th Century and extended in the early 20th Century. It has been refurbished many times.

Nearby, at 4/5 Broughton road was the Post Office. The building is 14th to 15th Century and built on a cruck frame with old timber. The Post Office moved out in the 1900s.

A building called ‘School House’ was pulled down in 1910 and a pair of semis built by the ‘Merchant Venturers’ of Bristol who had bought the village. They owned the village from 1945 until 1960’s. MKDC built other semis nearby.

‘Nurse’s Cottage’ was the home of the district nurse in the 1950’s and the name stuck but the building is much older.

Further along the Walton Road is ‘Southside Farm’, one of the oldest and longest continuing farms. The building is 18th Century. Farm workers lived in the attics .The Powell family farmed until 1970’s. Their land stretched from Oakgrove to Walton and Monkston. During the 1939-45 war prisoners of war were housed in the wood-panelled attics and worked on the farm. The converted granary has a protected 14th century wall in the garden.