You are here: Home>Archive>Days of Pride Collection. 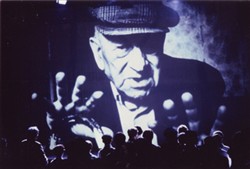 In 1981 Roger Kitchen and Roy Nevitt wrote a play looking at the impact of World War One on the people of Wolverton and New Bradwell. As part of this they spoke to people alive during this period and recorded their memories. They also gathered photographs, slides and supporting documents. As well as material relating to the war they also gathered information relating to the Army Manoeuvres in Wolverton in 1913.