You are here: Home>A Century of Campaigning: People's Stories about the Labour Party in Milton Keynes DVD

A Century of Campaigning: People's Stories about the Labour Party in Milton Keynes DVD 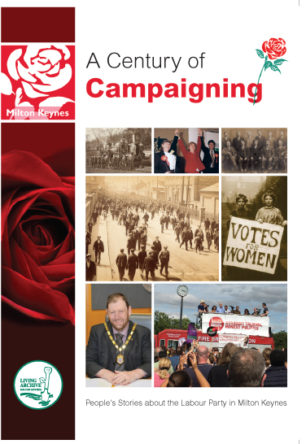 This film commemorates the Labour Party’s Centenary in the Milton Keynes area 1917-2017. It is built on stories from people in the Milton Keynes Labour Party, interviewed by Living Archive MK between 2016 and 2018; but it includes other memories and documentary material collected by LAMK since 1976 of local people’s experiences from the start of the 20th century. The provenance is infinite – there are many stories still to be told; but those in this project perhaps evoke some of the challenges, controversies, achievements and personalities that comprise Labour’s first centenary in Milton Keynes.
The century covers a tumult of both national and local phenomena: social upheaval – with the imposition of wars and government policies; controversial party leadership including Robert Maxwell and Tony Blair; and transformation – from rural to modern living. It also covers the multiplicity of people’s efforts to overcome problems – by campaigning…