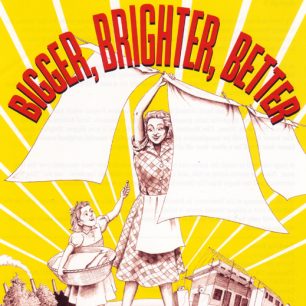 The documentary musical play, Bigger, Brighter, Better was performed at The Sanctuary, Bletchley in December 1996. It was devised by Rib Davis and Roger Kitchen and traced the lives of the people who lived through, and indeed fashioned, the development of the town from the 1940s to the late 1960s – all in their own words from recorded interviews and newspaper reports of the time.