You are here: Home>Archive>WHERE THE LINES MEET>Oral history audio recording of Eric Redford (b.1924). 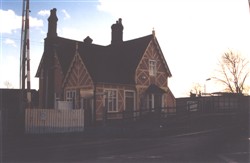