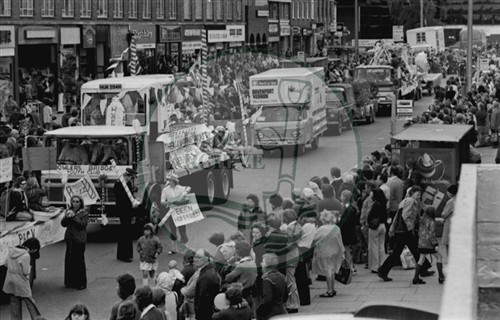 The interviewees talk of their origins: one was born and lived on a farm in Steeple Claydon, and married a Bletchley man in 1960. She worked until she had twins in 1966; when they started school she worked in the kitchen at the special school.

The other interviewee (Margaret) moved to Bletchley from London in 1967 with her husband and children, for housing and a job for her husband. They enjoyed the rural surroundings. She remembers life in their pre-war semi, and recalls it took a little while to be accepted, as a London incomer. She recalls the local shops, the market and food prices; her children loved the animals at the cattle market. Margaret used to help at playgroup; She missed the London shops; but she knew of the Milton Keynes (MK) plans before moving. The children joined the swimming club in Queen’s Pool; in her opinion its closure wasn’t a good idea – ‘You can’t really swim in the leisure pool’. She talks of changes in lifestyle nowadays and attitudes to women working.

Both interviewees recall the Queen’s visit, and the Carnival: ‘there was much more enthusiasm for Bletchley Carnival than now in MK’. They talk of the closure of Studio cinema (Bletchley): ‘that was very sneaky’. They describe the Mothers Club (for mothers moving into the area), which was formed in about 1968, and remember the lack of a hospital. Employment changed from the 1950s with the development of the industrial estate; they recall the main employers. In their opinion the arrival of MK did not help Bletchley: ‘Milton Keynes spread out far more than I thought it would’. They noticed increases in traffic and in the number of incomers. While the City Centre was under construction, a visit there was ‘a Sunday afternoon outing’.