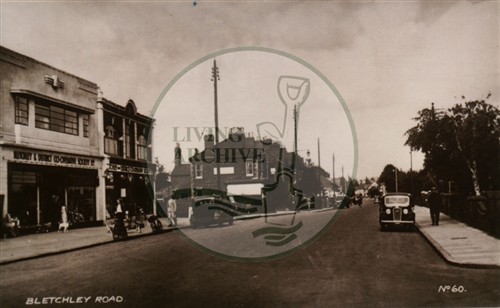 Members of Bletchley Toc H group reminisce, recalling Bletchley before the end of World War II as a nice sociable place ‘where everybody knew each other’ with a variety of shops and two cinemas. They discuss the distinction between Bletchley and Fenny Stratford. In the 1940s Bletchley had more of a village atmosphere and they remember some suspicion of outsiders in the shops. However, one interviewee, who arrived from London later than this, found little diffiulty ‘blending in’ with other residents.

They recall local schools attended by their children, including the opening of Bletchley Grammar School (in 1956). They discuss employment opportunities such as the brush factories, which provided mostly work for women. One interviewee worked at Bletchley Park (BP) in the kitchen and comments on the Leon family’s contribution to the community:as well as work on the local councils, they employed many farm-workers on their Estate. All BP workers were provided with a house, which was left to them in Lady Leon’s will.They mention the secret wartime work at BP, saying that no-one knew what was going on and didn’t ask. Other interviewees remember the Bletchley Show at the Park.

They mention that there were few social activities. One interviewee was pub landlord at the Cuba pub at New Bradwell and later at the Denbigh Hall Inn; he recounts various anecdotes about pubs.